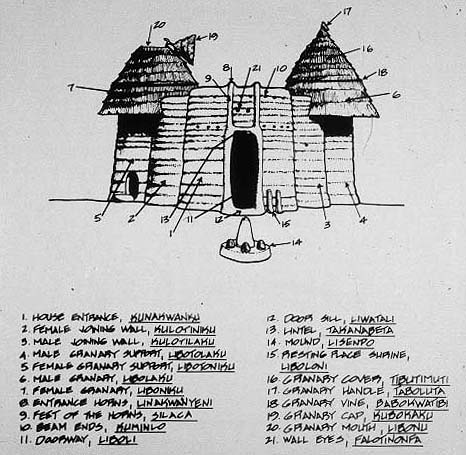 Last week I went to Flat Time House the once-home of artist John Latham (1921–2006) to meet with director Gareth Bell-Jones. The building now houses Latham’s archives and in many senses it embodies the cosmology the late artist proselytized and inhabited. Not unlike West African Batammaliba architecture, Flat Time House literally presents itself as a (social) body replete with ‘mouth’, ‘digestive system’, ‘brain’ and a ‘mind’ – the sunlit front room – choreographed to ensnare unsuspecting visitors in Latham’s dense philosophical dialogue. When he was alive the artist was known for his dynamic but often opaque and rambling mode of explaining the world through his work, and this tendency survives him in the concretized objects and diagrams that continue to populate the Mind and Brain of Flat Time House where Latham’s archives are kept.

Gareth had promised me ‘his version’ of a tour through these inner workings, and I went with a specific interest in learning more about Flat Time Theory, which I have come to understand as Latham’s proposition for a new conceptualization of reality, drafted with the utopian premise of shattering binary oppositions between subjects and objects by presenting All Things horizontally on a canvas of the artists own creation. The Flat Time Canvas, a sort of hyper-object, prioritizes the temporal dimension of things and – according to Latham – if one is able to experience all objects as durations in time, this lends them an equivalence without hierarchy, drawing them into undeniable relation with each another.

The tour was particularly satisfying because Latham’s works – which otherwise camouflage themselves fairly well in a more anonymous gallery context as straightforward ‘sculptures’ and ‘paintings’ – took on the role of performers or integral narrative props that literalised what might otherwise have been an indigestibly dense burrow through the diverse realms of influence that contribute to Latham’s cosmology. The point here is I suppose that, true to form, ‘flat time’ cannot be encapsulated in any single object or static sketch—moreover the objects that inhabit this world are not compliant representations that can be ‘explained’ or made sense of in isolation or through simple definition and it is therefore only in time, and probably only through some form of dialogical performance, that Flat Time might begin to unfurl itself and (if only for a fleeting instant) become legible. Perhaps this legibility then corresponds to Latham’s ‘Least Event’, discovered by the experimental spray-painting of a neighbor’s fence, the smallest possible action or moment in time that might refer equally to a single atom or an atomic explosion on a global scale. The Least Event exists inside the Mind as a one-second drawing made with spray paint, and again as a blank white canvas, alongside the Zero Event (materialized as a corresponding plane of glass). These are but two reiterating characters in a glossary that bifurcates the closer you look.

I’ve been particularly curious to discover the degree to which Flat Time, and Latham’s approach to mapping this 4D diagrammatic system, might correlate with the way I’ve been dealing with animal traps as durational objects and systematic assemblages, made of tendencies and capacities that relate to the umwelt (the sensory environment) of an animal. Traps are compelling and useful, in that they shed light on environmental relations in the context where they’re set, and have a tendency to invert general and personal assumptions regarding perspective, geometry and time. These inversions are, I suppose, a large part of what an Anthropology of Other Animals might really be about, particularly through the extended challenge that they pose to our collective reliance upon thinking of ourselves as humans in opposition to animals, subjects in an objective world, sentient beings in the context of an un-sensing material landscape, etc.

Thanks to Gareth’s verbal somersaults and Latham’s material traces I located many elements of what I’ve come to fondly recognize as the ‘trap structure’ on the Flat Time Canvas, which – like the trap – is capable of transplanting static things and presumptions into an animate universe through a mode of classification focused on intensive relationships (as opposed to extensive objectivity), thanks to the generous provision of time. As a disclaimer, I wasn’t totally new to these ideas and after reading a few of Latham’s own text through FTHo’s fantastically nebulous online archives (another story) had a hunch that Flat Time and Trap Time might overlay with interesting results. But what I hadn’t reckoned with before hand, and the thing that really leapt out during this visit (I really don’t think this realization would have crystalized without a direct encounter with Gareth in the context of the assemblage of works) was the deep-set trickiness of the whole project, and the absolute evasion of reductive figuring-out that lies at the very core of what Flat Time theory is and what it stands for. Drawing on theoretical physics (which also largely evades my understanding, beyond my comprehension of my incomprehension), there is a relativity at play here – or rather a perspectivism – that enables Latham’s world to be inhabited fully but fleetingly from an embodied position or duration, whilst the world entered into proceeds to internalize this very same ‘duration’ in an almost uncannily predictive mode, so that in reading, playing, or breathing Flat Time one cannot help but read/play/breathe oneself. There is a near-overwhelming openness that the Flat Time Canvas offers up to the willing participant, which is also almost certainly the lure that pulled me in with the idea that it might somehow befit my developing Anthropology of Other Animals. Of course it does, but by no means exclusively; just as the least event stands for any number of things with a nominal duration of ‘1’, Flat Time as a grand cosmology will elegantly sync with any other web of entanglements that is likewise open to recursion and perspectival exchange.

To reflect a bit on all this: in dealing with open systems and the sparagmos they spit out, I suppose the point must never be to find the point (as it shifts the harder you look for it) but rather to mimic its fulcrum with an equal openness of perspective, and the attentive nothingness of a white canvas or a trap set, ready to pounce on fleeting coherence if and when it presents itself. Arriving at the least event with a flash of recognition, or catching for a moment the point of simultaneous everything-and-nothing, it’s hard not to feel a dizzy impasse in the face of infinite scalability and abandon the Flat Time project as just another attempt at umbrella-modeling an abstract utopia that can never be grasped or inhabited on the ground. But taken in the context of Latham’s life and work, including his role in developing the Artist Placement Group (responsible for inserting artists into businesses and industrial workplaces as site-specific provocateurs in the 1960s, concurrent with the birth of conceptual art and long before artist residencies were ‘a thing’), the practical implications of re-choreographing artists’ relationships with objects, contexts and time become explicit. APG’s worldly outputs range from impacting government policy to the preservation of large areas of undeveloped countryside in the British Isles. According to APG’s founder (also Latham’s former partner) Barbara Steveni, the more prosaic Artist Placement Group is more often quoted and much more widely understood than Latham’s esoteric theories of Flat Time.

My next hunch is that the usefulness of Flat Time as a system or approach is somehow also articulated through anthropologist Roy Wagner’s diagrams of obviation, which he deals with in ‘Symbols Which Stand For Themselves’, and that something equivalent to the Least Event is figured out through the fractal cascade-relations described by Marlyn Strathern in her ethnographic models of pig exchange in Melanesia (Alfred Gell does a good job of making this a little more tangible using diagrams in his essay on the topic, see Ch. 1 ‘Strathernograms’ in The Art of Anthropology, Essays and Diagrams).